By The Stay Club
20th August 2020
North West London covers a lovely selection of areas and neighbourhoods, meanwhile offering an interesting part of the city to explore. It’s also the slice of the city where all four of The Stay Club residences are located! From Camden to Belsize Park, Queen’s Park and Kentish Town, North West London is diverse in its lifestyle options, including cosy drinking spots and well-known pubs. Lively cocktail bars and gastro pubs with a reputation among Londoners are just some of the spots that you will come across, offering a nice variety of places to visit when exploring North West London.

The Difference Between Bars And Pubs

When contemplating your weekend plans, bars and pubs may seem like equally great options to indulge in, yet they do have quite a few differences between them. When visiting London bars, you will often find menus that can be described as minimal, with a varied selection of liquor that moves beyond beers and wine to include imaginative cocktails among other bar classics. Pubs are more often associated with filling food menus and a number of them do Sunday Roasts, a British tradition often reserved for Sunday outings… If you are aim-ing for a pub that shines a spotlight on its food menu a little more than average, then it may be time to look into the best gastropub in your area. One key difference between the two, though, would likely be the ambience. Pubs are considered a very British thing, but they also frequently boast a laid back, relaxing vibe as op-posed to bars that are often livelier with a more energetic ambience, especially if Dj sets or live music are on the schedule!

Some renowned for their extensive list of beers, some for their long-standing tradition, some for a combination of both; finding pubs to enjoy is not a challenge but narrowing down the best pubs in London definitely is! Although speaking for the entire city wouldn’t be possible, we do have some thoughts on a nice variety of places to visit in North West London, and we have put them all in a nice blog entry for you to browse through!

The Horseshoe is a lovely spot in Hampstead, located a short walk from the stunning Hampstead Heath park, so you can easily combine an outdoors excursion with a catch up with friends. Those that enjoy visiting a variety of pubs and bars probably know this London spot as being home to Camden Town Brewery. The fact that it stocks the full range of Camden beers is an added plus! Aside from a lovely selection of beers, The Horse-shoe also boasts a filling food menu, the relaunch of which is currently underway. You can find this great pub at 28 Heath Street, NW3 6TE or visit their website

As far as local pubs go, Southampton Arms is one to try out. The moment you lay your eyes on it, you realise it stands out from most pubs in North West London due to its old-school façade which hints to a proper British boozer. There is a nice variety of beers on tap, but it also stocks nearby breweries so it’s ideal if you want to get a taste of local life in Kentish town. The signage outside the pub makes it clear that real ales and ciders are to be found inside, and we can’t help but think it’s one of North London’s cutest drinking spots! You can find it at 139 Highgate Road in Kentish Town.

Curious to discover award winning pubs and bars? We have one for you: Chandos Arms has won the Great British Pub Awards of 2019. Arguably one of the best pubs in North West London, it organizes plenty of events, boasts a cool food menu and a Sunday Roast too! Chandos Arms is conveniently situated on Colindale Avenue, a short walk from The Stay Club Colindale, offering one of the nicest drinking spots in the area. Find out more on their website

A breath away from Camden’s hustle and bustle, Colonel Fawcett is a pub with a lovely garden area and outdoors seating out front, ideal for those warm summer evenings. The quality of their British food menu is much discussed, while the pub has joined others in the ranks of award-winning spots to enjoy (for more on their accolades, visit their website!). From craft beers to gin options, Colonel Fawcett stocks quite the range (there is even a mention of an annual Colonel Fawcett Gin Day), and it is conveniently located a few minutes from Camden Road overground, and less than ten minutes from Camden Town’s tube station.

Looking for a quiet and cosy corner to dive into your Sunday roast? The Earl of Essex is located in lovely Islington, a little further off from Upper Street and, although its local feel is evident form the first moment, it has gained quite a reputation for itself. It is considered Islington’s first brewpub and flaunts a cute beer garden among a constantly evolving list of beers, both international as well as local. The food menu is an added plus for this local corner, less than ten minutes from Angel tube station on the Northern Line.

The Stay Club Camden is situated next door to Camden’s favourite, The Lock Tavern. The friendly vibe of this classic corner isn’t the only reason to visit; the pub also boasts a varied selection of beers, a food menu that spans all day options as well as Sunday Roasts and a beer garden and terrace so you have plenty of out-doors spaces to make the most of! The Lock Tavern is also one of our partners, offering our residents an exclusive 15% off the pub’s entire menu from Monday to Wednesday, with a show of The Stay Club key card!

Among the numerous pubs in the vibrant Kentish Town area, The Pineapple stands out, not merely because of its unusual name, but also because of the Grade II listed building it is housed in. The pub is only a few minutes’ walk from Kentish Town Station, with a conservatory that offers a unique seating area to enjoy, aside from the relaxing outdoors tables which complement The Pineapple’s blue façade nicely. This locally be-loved pub is one to be on your radar for more reasons than one!

As far as North London‘s independent gastropub scene goes, The Bull in Highgate is a notable mention. The interior is refined but doesn’t shy away from the lovely wooden decor that is commonly seen in London’s pubs. It is the outdoor seating area, however, which takes the experience a step further. Gorgeous Brewery is also housed behind The Bull, and the beer garden offers the five-barrell brewrey’s hand crafted beers on tap for your enjoyment. As if that wasn’t enough, there is also a nice variety of food options to dive into.

If you are on the lookout for the best bars in London, then the North West slice of the city may be a good place to start! There is an interesting variety of cocktail bars, live music joints and creative drinking spots dot-ting this part of the city, some of them having frequently made it to lists of the best bars in London. So, we went ahead and created a list of our own favourites to share with you…

When the discussion revolves around great bars in North West London, Bobby Fitzpatrick is bound to come up. Not simply because of its out of the box interior, which creates an enjoyable environment to hang out with friends, but also because of its creative drinks’ menu. If you want to grab a bite alongside your beer, the stone baked pizzas are bound to catch your attention, among other delicious sounding nibbles from the food menu. All in all, this 70s charmer is one of West Hampstead’s most well-known spots, just a short walk from the overground station too!

The Bar With No Name

The bar’s mysterious title sets the scene for what is to follow. The small venue offers an intimate experience, alongside a seasonal menu of bespoke cocktails. The drinks selection is curated with care and complements the 50s Italian feel of the bar nicely. The Bar With No Name can be found at 69 Colebrooke Row, a few minutes away from Angel tube station, and close by the lively Upper Street!

This quirky cocktail bar is considered one of West Hampstead’s delights. The two-tiered bar has a curated interior with interesting seating areas that convey a different feel. One is brighter and a touch more laid back, whereas the other has an accentuated luxury feel to it. Their drinks menu has everything from long & short to short & stirred (depending on which bar you choose to sit at), and the fact that they identify as a “local neighbourhood bar” means it’s the kind of place that you are bound to enjoy with friends!

Near and Far, Camden

If you are browsing up and down Chalk Farm Road, it’s unlikely you won’t stop for a moment and peek through Near and Far’s windows, with the eye-grabbing pastel décor captivating passers-by. The Camden corner has an imaginative interior which includes disco balls, palm trees and neon pink lights! The seasonal cocktails menu is brilliant and it’s also at a discount if you show your Stay Club key card.
VISIT THE STAY CLUB COLINDALE
VISIT THE STAY CLUB CAMDEN
Best Pubs and Bars in North West London2020-08-202022-07-12https://www.thestayclub.com/wp-content/uploads/2019/03/logo-blank-opt.pngThe Stay Clubhttps://www.thestayclub.com/wp-content/uploads/2020/08/bars-and-pubs-at-camden.jpg200px200px
Copyright All Rights Reserved © 2022 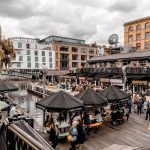