Top Things To Do in London this April

Another month, another endless list of possibilities in the city that never ceases to amaze us! April is going to be a blast no matter how you choose to spend it… But our April Guide is here to serve you with your monthly dose of inspiration!

Let’s celebrate the Easter weekend, London-style! Starting on April 19th, the Easter weekend is going to be event-filled and wonderfully over the top occasion that we are looking forward to! Given that Good Friday and Easter Monday are public holidays, you have the opportunity to explore all that London has to offer during the Easter celebrations, including chocolate bunnies from London’s best chocolatiers, the most delicious Sunday roasts around the city and one of the specially curated Easter events in the works…. Stay tuned for our dedicated Easter weekend article to find out more!

The Virgin Money London Marathon has become somewhat of a tradition thus far, and that’s why it amassed more than 327,516 UK applications in 2018! The 26.2-mile marathon starts at Greenwich and moves through an impressive route, inclusive of the most spectacular London landmarks… Even if running it is not your thing, you can join the myriads of spectators that gather up to cheer on the joggers! April 28th is officially taken up on your calendar…

If over a quarter of a million people gather up to see the spectacle, then it must be worth it! On April 7th, experience the battle between Oxford and Cambridge on the Thames, with eight-oared rowing boats! The Championship Course is an astounding 4.2-mile stretch from Putney all the way to Mortlake. There is quite the story here, with the first boat race having taken place all the way back in 1927. Our tip would be to research where the best viewing spots around London are, with Putney Bridge and Hammersmith taking the lead!

Although the Underbelly Festival will stretch well into September, its first events are scheduled for April! This ginormous festival site will return to the South Bank for its 11th year, and it’s free to enter if you exclude the events… Underbelly plays host to an impressive selection of circus, theatre, cabaret and comedy performances! So be sure to thoroughly examine the event schedule.

5. Twilight Tours at the Tower of London

Fear not, this one is not as spooky as it sounds! The Tower of London is hosting atmospheric after-hours tours and giving us chilly insight as o the Tower’s infamous prisoners! The tour is led by a Yeoman Warder (more well known as the guard gracing the Beefeater gin bottle), and is almost entirely outdoors, adding to its allure…

Gamers will have the opportunity to indulge in 12 days of themed activity during April, that tackles the gaming culture from every single possible angle. The Hub includes a vast selection of industry talks and networking opportunities,while the Games Finance Market aspires to link games projects with investors and publishers, offering an unparalleled view into the gaming sphere from a business perspective. The BAFTA Games Awards is definitely the most sought-after event throughout the festival, but EGX Rezzed is a close second, giving participants the opportunity to try out thousands of games and chat with their creators! Find out more here: http://games.london – 2nd to the 14th of April!

Care to join a 5km run with plenty of art inspiration along the way? Then the 5km street art tour is your thing…The tour will enable you to explore London’s astounding street art while keeping up with your workout schedule! Discover the background and inspiration of the most impressive street art gracing London’s East End, and dive into the street art culture in this immersive and innovative run! 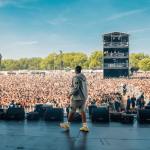 The Festivals to Watch Out for this SummerLiving in London

Top 6 Things to Do During the Easter WeekendLiving in London